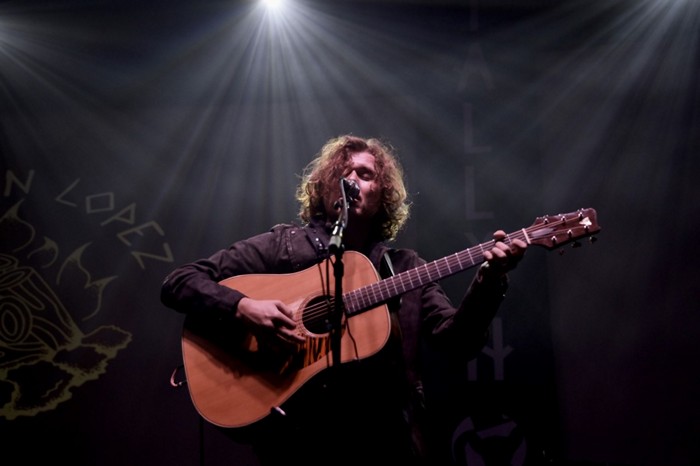 Suggested donation $25/adults, $5 student – please enter your desired donation on the order form and indicate how many tickets you are requesting.
Tickets/Donate

Christian Lopez isn’t merely riding the wave of Americana, the West Virginian native is bending it to its knees. As the son of a music teacher, he was learning piano and guitar by the time he was in kindergarten, and he recorded his debut album, produced by Americana super-producer Dave Cobb (Jason Isbell, Chris Stapleton), when he was just 18. But on his new album The Other Side, Lopez transcends all of those hot-shot titles to emerge a well-rounded and experienced artist.

A collection of 12 eclectic songs that veer from sprightly indie-rock to brutally vulnerable ballads, The Other Side, produced by Robert Adam Stevenson, is the sound of a man who knows precisely who he is. Now 25, he’s excised the trappings of a youth run wild and all but killed the ego that can undermine the evolution of an artist.

“This album is a product of the strength I had to walk away from everything I knew,” Lopez says. “I had to start fresh on my own.”

A musician’s musician, Lopez plays every instrument on The Other Side, with an assist from drummer Carl Thompson. While the West Virginia native’s earlier albums, 2015’s Onward and the 2017 follow-up Red Arrow, embraced more organic sounds and instruments — underscoring his Appalachian lineage and roots-rock pedigree — The Other Side smartly expands and electrifies his palette. It’s a muscular record, dynamic and unencumbered by genres, but with hints of Lopez’s influences: the Avett Brothers, David Byrne, Tom Waits, and Johnny Cash.

It’s been a few years since Lopez brought his band to the Ross Farm, and we are so excited to have them on our stage where we’ll hear the new songs and some of our favorites from Christian’s seven years of Ross Farm concerts! Bring your lawn chairs or blankets to spread out and enjoy. Concert will be held rain or shine. Picnics or snacks are welcome, too, we just ask you to carry out what you carry in. Gates open at 5 p.m., concert begins at 6 p.m.