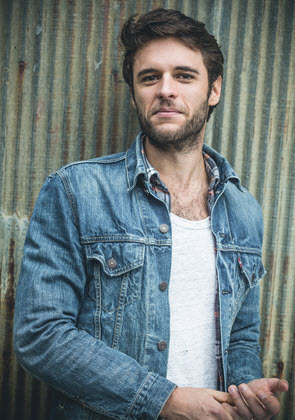 We just can’t get enough of JD Eicher!

JD Eicher returns to the Ross Farm this spring after opening our first Autumn Acoustic Afternoon last October! We loved him so much we wanted to have him back as soon as we could, and we’re delighted he’ll be playing on Thursday, June 16 at 7:30 p.m. (doors at 7 p.m.). Weather permitting, this show will be outside. Chairs will be available, inside or outside, but feel free to bring a picnic blanket or your own chairs.
JD’s website, jdeicher.com, updated his fans about his latest release, The Middle Distance, and JD’s process in writing this album:

“The music that I’m writing and releasing is really mirroring who I am and where I am at that time in my life. It’s easy to perform songs when they’re very true.” So says JD Eicher, the Youngstown, OH-area born and bred musician who is set to release The Middle Distance via Rock Ridge Music on May 6, 2016. “I’m really glad that my career has taken the longer, ‘scenic’ route, because the music I’m writing now has a certain truth to it that I’m not sure I would have found otherwise.”

The Middle Distance marks the first album Eicher will issue since sunsetting the moniker, JD Eicher & the Goodnights, used on the trilogy of titles, The Shape of Things, Shifting, and Into Place, released previously. Why the change? Eicher explains: “It’s really just a shortening of the name. The band is still together, and this was a careful decision we made together. It felt natural with the conclusion of our album trilogy project, the personal nature of this new music, and a desire to simplify.”

Eicher has noted that the common themes running through his previous three releases are “love, hope, and acceptance.” Common sense would call for speculating whether there is a common thread that ties together the ten songs found on The Middle Distance. “Not a premeditated one,” he is quick to clarify. “I really wanted to just sit down and write the best songs I could, saying what I needed to say at the time. It’s more of a journal entry/diary-type approach this time around.”

With that as a forward, the first chapter of Eicher’s aural journal begins with nearly one minute of U2-ish guitar that sets the sonic table for the album opener, “This Heart,” in which he sings, “All my fears, all my worries, are alive and well inside this heart.” Eicher expounds, “This whole record – and definitely that song – is moodier, and there’s a lot of internal struggle, internal processing. When you hear the song title, ‘This Heart,’ it sounds like it’s gonna be a love song, but it’s really more about coping and figuring out how to get past whatever you’re dealing with in that moment.”

Songwriting and superb singing are at the center of each track on The Middle Distance, exemplified by the lyric line “Maybe we’ve been trained to wash, rinse, and then repeat” and the heavenly falsetto vocals found on “Be Well,” a song which sounds like it would fit perfectly into Death Cab For Cutie’s catalog. An audio oasis to the overall “moodier” sound of the record is refreshingly felt when the soundscape lightens up for the bouncy “The Little Bit,” which musically and lyrically has a Jason Mraz vibe to it, most notably on the playful line, “I didn’t write any lyrics for this part of the song… everybody relax.” Eicher’s songwriting gravitas shines in the more serious selections – “Not Everybody Runs,” a sonic commitment to, well, commitment; “Not Afraid,” in which abstract fears about our dreams not coming true, relationships going wrong, internal struggles and pressures, letting your guard down and being hurt, and failure are all tackled; and “Man of Faith,” in which Eicher espouses the somewhat ambiguous supplication: “And I’m pretty sure my heaven’s just the answer to my questions.”

Far less ambiguous is how much Eicher’s Rust Belt upbringing seeps into, or serves as, the foundation of his songwriting. “I think it definitely affects the music,” he affirms without hesitation, “even in the way I approach touring and my overall work ethic with songwriting and recording. There’s a world-wariness that comes out of this area that gets into the songs. I think there’s a realism that comes out of this part of the country, too, and I think that gets in there as well.” It’s no wonder that Pittsburgh, not far from his hometown of Youngstown, has embraced the performer and his music as their own.
With his band, The Goodnights, Eicher’s soaring and graceful pop-rock songcraft garnered favorable comparisons to Coldplay, Keane, The Script, The Killers, and Death Cab for Cutie. Alternative Addiction named the group one of the top 10 unsigned bands. Virgin America Airlines used one of the band’s songs in the teaser for the airline’s movie, Departure Date. Live, JD Eicher & the Goodnights shared the stage with such diverse and respected artists as the Dave Matthews Band, Coldplay, Train, Maroon 5, Hot Chelle Rae, Pete Yorn, Anberlin, Rod Stewart, Bryan Adams, Kelly Clarkson, Cartel, Sister Hazel, and Matt Nathanson, among many others.

Now facing a new morning with the added weight of offering up The Middle Distance with just his name on the album cover, does Eicher like the way the shape of things have shifted into place (to borrow a phrase from past album titles), both personally and professionally?

“Yeah, definitely. I do feel a lot more firmly-rooted. I feel like there’s a lot less doubt. I know who I am a lot better than I used to, and a lot of my life is starting to make more sense. I’m married now. We’ve got a house. The real world stuff has come together in a really meaningful way. And my musical life mirrors those sentiments as well. This was the first time I felt comfortable producing a record on my own. I knew how I wanted it to feel, start to finish.”

For those reasons and more, it’s fair to say The Middle Distance is destined to take JD Eicher even farther than where he’s at today. That prospect makes it a near certainty that his steady pace to the top will likely result in him experiencing the musician’s equivalent of a long distance runner’s high.

Help us welcome JD back to the Ross Farm on June 16! Tickets are available in advance via or at the door for $20.